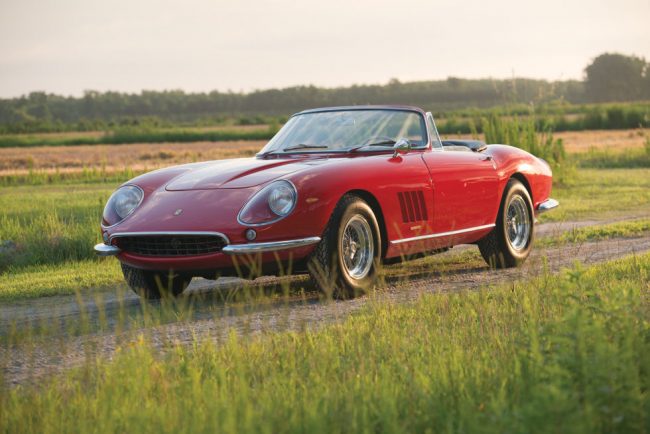 Price: $27,500,000
Auctioned by RM Sotheby’s in Monterey, California, on August 17, 2013
Sold new to a buyer in North Carolina, this one-family car was one of ten N.A.R.T. Spiders ever built. N.A.R.T. stands for North American Racing Team, and it amounted to a badge on the rear of the Scaglietti bodywork. Dark blue from the factory, it spent most of its life in that hue until its owner repainted it red, but the normal value-drop that a color change brings had little effect on this pristine example of a rare car.
It was also fitted with an unusual chromed grille guard particular to this car. Years later, according to the owner, concourse car show judges protested the “unoriginal” grill guard, to which the owner replied “Well, if that’s not original, I’ll be as surprised as you are, because it was on there when I picked the car up (from the factory) myself in Modena.”
Chassis 10709 stayed in the same family until 2013, when it went up for sale and became the highest-priced road car to ever leave an auction block.