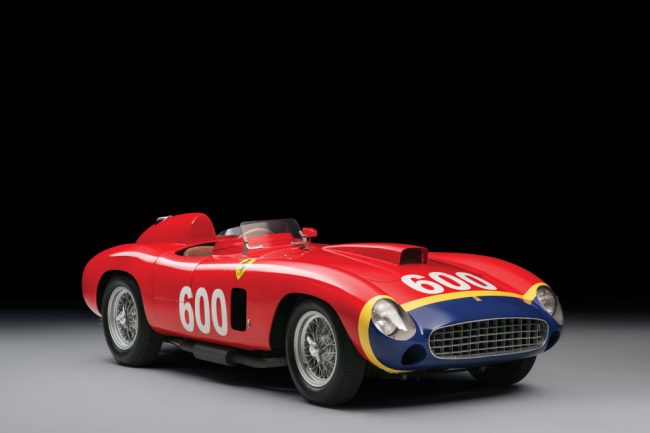 Price: $28,050,000
Auctioned by RM Sotheby’s in New York City, New York, on December 10, 2015
Enzo Ferrari pinned upon this car his hopes of securing the manufacturer’s title for the World Sportscar Championship, a series Ferrari had dominated in its inaugural years before losing the title to Mercedes-Benz in 1955. Engineer Vittorio Jano convinced Enzo to once again mount a V12 between the fender walls after several years of using four- and six-cylinder engines. Juan Manuel Fangio, who’d become a five-time champion of the series, was chosen to drive 0626 in the Mille Miglia.
Behind other, equally famous hands, the car placed well in follow-up races at the famed Nürburgring, Rouen-Les-Essarts, and Kristianstad, where a second-place finished secured Ferrari the 1956 World Sportscar Championship. By the time it raced its last professional race in 1964 and passed to private ownership, 0626 had never been crashed, a rare bit of luck in a sport in which most cars eventually sorted into two categories: crashed or parted out. Ever since, it’s made regular appearances at Goodwood and the Concours of Elegance, raced sporadically in amateur historic races such as the Mille Miglia Storica, and featured in French museum exhibits and collections.