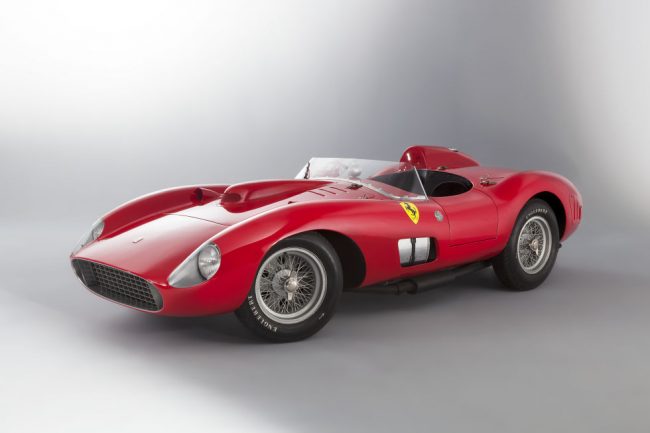 Price: $35,711,359
Auctioned by Artcurial in Paris, France, on February 5, 2016
Chassis 0674 began life as a Scaglietti-bodied 315 S factory race car, entered by Scuderia Ferrari in the 1957 12 Hours of Sebring. Driven by factory drivers Peter Collins and Maurice Trintignant, it finished sixth. The 315 S was handed to driver Wolfgang von Trips that May for the Mille Miglia, Italy’s famed 1,000-mile race across closed public roads.
Afterwards, it was returned to the factory to have its 3.8-liter V12’s displacement increased to 4.1 liters, thus turning the car into a 335 S. Now able to top 185 miles per hour, it appeared at the 24 Hours of Le Mans driven by Mike Hawthorn and Luigi Musso, where Hawthorn set the race’s first-ever lap record. Chassis 0674 finished out the year racing in the Swedish Grand Prix and Venezuela Grand Prix and won Ferrari the Wold Constructors’ Title of 1957.
With its mission accomplished, Ferrari sold it. The 335 S spent two years as a privateer racer in Cuba and America, and thereafter retired from full-time competition.