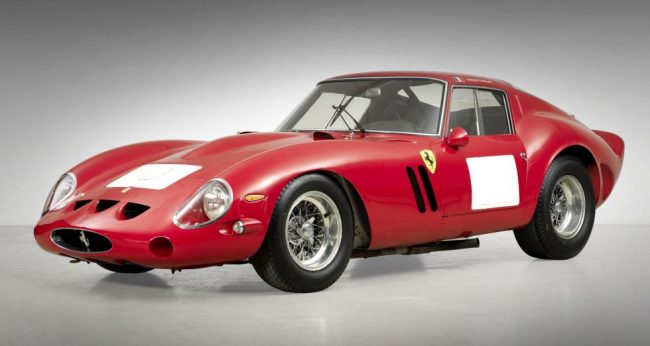 Price: $38,115,000
Auctioned by Bonhams in Carmel, California, on August 14, 2014
The 250 GTO was an immediate favorite to win when it debuted, with Ferrari having proven itself a front-running racing car by 1962. This car, Chassis 3851GT, was bodied by Scaglietti and sold to Jo Schlesser, an emerging privateer racer who planned to share driving duty with his friend Henri Oreillier, ex-professional skier and hero of the French Resistance in World War II. During the car’s second race, Oreillier was killed at the wheel in a crash at Coupes du Salon. The heavily damaged vehicle was repaired at the Ferrari factory and sold to an Italian privateer who used it to win 12 of the 14 hill climbs he entered in 1963.
Now a famously winning car, 3851GT was sold again—and crashed again. During the 1964 Coppa Inter-Europa, it rolled over, caving in its roof but causing little other than cosmetic damage. It was repaired once more by Ferrari, but the following year its owner considered parting out the tired car. He sold it instead for 2.5 million lire, about $33,500 USD adjusted for 2014 inflation. The buyer hung onto the car for 49 years until he sent it to auction in 2014, where it set the world record for the most expensive car ever sold.